IN THE HIGH COURT OF SOUTH AFRICA

(a)   The Applicants’ application is dismissed with costs.

The erection of a freestanding base telecommunications station on Erf 80708, 47 Fourth Road, Heathfield, Cape Town (the property) on or about April 2016 is declared to be unlawful.

(b)  The use and development of the property for the purposes of a freestanding base telecommunications station is declared to be unlawful.

The cell-tower in question has been illegally operating for over two years now. It has never received the City’s approval. Despite strong objections from the community and countless letters to city officials (including the Mayor Patricia de Lille) the tower remained operational.
Only after its erection and the uproar of the community was the community notified of the objection application process.

Timeline:
October 2016: Since this date Ms Denise Rowland ( a community activist)  has been actively involved  in trying to get the illegally erected cell mast situated on Erf 80708 at 47 Fourth Road, Heathfield, dismantled.
This case was featured in a document written, at Ms Rowlands’ request, by Canadian Olga Sheean ‘Challenging the towers that be’ – an appeal to Cape Town Councillors – emailed during December 2016 and copied to all in authority within this city to implement change (including Mayor Patricia de Lille). 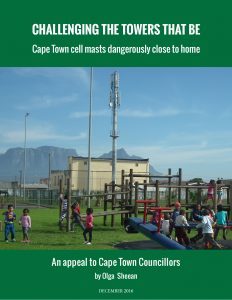 Many further emails to Mayor Patricia de Lille were ignored. Requests for a  meeting with the communities of Heathfield, Mitchell’s Plain, Forest Glade and  Manenberg to discusss cell tower placements  were denied because the mayor’s calendar was ‘booked up’.

No confirmations of receipt were ever received by Ms Sheean.Ms Rowland appealed to MEC Minister Anton Bredell with her correspondence being forwarded to Ms Bettie Leedo – Head of Environmental Affairs. Councillor  Kevin Southgate became involved and supported investigation of the process involved in placement of this tower.
17 May 2017: Letter to municipal authorities by Mrs Kay Wentzel, community spokeswoman:
In 2016 during the month of March, Telkom erected an illegal freestanding mast at house no 47, 4th road, Heathfield.  No due process was followed. To this day the mast still stands and is operational.
This is a violation of the city’s telecommunications infrastructure policy.  The city has acknowledged the mast to be illegal  (e-mails archived since 2016-2017  for your request)

I am sure you have been informed of this matter along with so many others. Our communities have been  impacted negatively and we need the city’s support in having the masts removed.

After my husband passed in 2013, I was given the opportunity to invest in the suburb Heathfield after twenty five years of renting. I purchased a ruined home in 2014,  did eight months of renovation and finally felt content, safe and home. The feeling of owning a home, a space that is yours to enjoy and embrace with your family.  The feeling of content was short lived due to the illegal mast being erected in close proximity to my home. I would not purchase a property if towers were visible, so clearly this has an impact on our investment.

How do we move forward in a positive manner to ensure our community has peace of mind knowing their  health and investment won’t be compromised. Our answer would be to have the masts removed and alternative options to be explored and considered.

I trust this letter is read with compassion for people and a healthy Cape.

I thank you in advance and appreciate your assistance in this regard.

On behalf of our community.  K Wentzel

10th of May 2018  Finally! – This judgement has sent out a clear message to the telecoms industry that the City of Cape Town will not condone illegally erected cell-towers. We trust that the unlawful Heathfield tower will be dismantled as soon as possible. 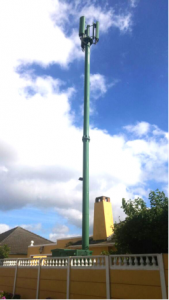 Telkom does it again:

The City has taken a Parklands church to task for letting Telkom put up an “unauthorised” cell mast on its property, just metres from a daycare and a primary school.Residents are furious and say they weren’t notified about the mast, which went up at the Full Gospel Church, in Humewood Drive, the weekend before Easter.

Telkom vs City of Cape Town:Telkom heads for the Supreme Court!