Berkeley Cell Phone “Right to Know” Ordinance
Electromagnetic Radiation Safety http://www.saferemr.com/
On the April 21, 2017,the city of Berkeley won a major decision in a federal appeals court. The court denied a request by the CTIA-The Wireless Association to block Berkeley’s landmark cell phone “right to know” ordinance.
Berkeley’s ordinance which has been in effect since March 21 of last year requires cellphone retailers in the city to provide consumers with the following notification:

“To assure safety, the Federal Government requires that cell phones meet radiofrequency (RF) exposure guidelines. If you carry or use your phone in a pants or shirt pocket or tucked into a bra when the phone is ON and connected to a wireless network, you may exceed the federal guidelines for exposure to RF radiation. Refer to the instructions in your phone or user manual for information about how to use your phone safely.” 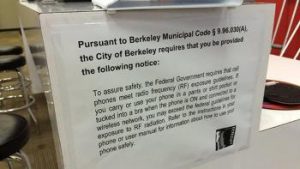 The three judges who heard the case on September 13, 2016 for the Ninth Circuit Court of Appeals upheld the district court’s denial of the industry association’s request for a preliminary injunction. The panel determined that “there was no irreparable harm based on the First Amendment or preemption, that the balance of equities tipped in Berkeley’s favor, that the ordinance was in the public interest, and that an injunction would harm that interest.”

Although the federal appeals court hearing only addresses the industry’s request for a preliminary injunction, the ruling bodes well for the City because the industry’s argument in the overall case for killing the ordinance is based upon the First Amendment and federal preemption. The court rejected those arguments stating that that the ordinance is in the public interest as it complements and reinforces existing Federal law and policy.

The ruling by the U.S. Court of Appeals for the Ninth Circuit can be downloaded from https://drive.google.com/file/d/0B14R6QNkmaXuSm9PZ0lsM1pKeEE/view

In a clear victory for the public right to know with a landmark court decision, the US Circuit Court of Appeals for the Ninth Circuit has upheld the City of Berkeley’s ordinance requiring phone sellers make public typically hidden advice about distances used for cell phone testing. In an April 21, 2017 filing, the Court decisively rejected the industry argument that making that advice public deprived them of their First Amendment rights.

First Amendment scholar and Harvard Professor Lawrence Lessig argued the case for the City of Berkeley, pro bono, pointing out that the City only required that hidden information about tested distances be made publicly accessible.

In its decision, the court noted that specific FCC tests require that phones be placed about an inch off the body and are generally not known by the public, quoting the FCC requirement:

All supported body-worn accessory operating configurations must be clearly disclosed to users, through conspicuous instructions in the user guide and user manual, to ensure unsupported operations are avoided.

Dr. Devra Davis, President of Environmental Health Trust, added: “This is a great day for the American public and for all those concerned with preventing harm and protecting our children. People have a right to know that phones are tested away from a large adult male body, and some distance from the head. A recent Canadian Broadcasting Corporation independent evaluation showed that phone radiation limits can be 3-4 times over approved levels when phones are tested as they are used– directly next to the head or body.”

Further judicial support for the need to reduce exposure to cellphones comes from a recent landmark court ruling in Italy granting monthly worker compensation to a man who developed a brain tumor that caused him to go deaf after he was required to use his phone regularly for work http://www.nydailynews.com/newswires/news/national/cell-phones-brain-tumors-italian-court-rules-article-1.3080304

Recently the Israeli Health Ministry advised that both students and teachers not be permitted to use microwave radiating phones in schools, noting growing scientific evidence of harms from such exposures. Source: EHT https://ehtrust.org/statement-by-dr-devra-davis-on-the-landmark-california-court-ruling-upholding-the-berkeley-cell-phone-ordinance/

Legal Accountability of a Guideline versus a Standard