Hundreds of cows die , give no more milk, develop signs of dementia and no longer resist disease. Calves born with malformations . Rabbits that die by the thousands. Pigs who refuse to get up, become aggressive, even cannibals . And sometimes, the health of humans also begins to waver.

For more than twenty years, breeders throughout France have been facing massive losses and abnormal behavior within their herds. They are convinced today: their problems are related to radiation from EMFs.

The culprits, according to them: power lines at (very) high voltage, electrical transformers, relay antennas, wind turbines and photovoltaic panels located on or near their farms.

Grouped together, a dozen of these breeders announced Monday, November 4, 2019 that they would go to court with the help of their lawyer Maître François Lafforgue .

Will electrical installations and new technologies be decimating the countryside?

For several weeks,  actu.fr has studied this complex issue, to try to dissect the ins and outs and give voice to the many protagonists involved. Here is the summary and links:

Breeders in great difficulty: in Loire-Atlantique , Murielle and Didier Potiron , who have lost more than 320 cattle since the establishment of a wind farm on their land; in the Sarthe , at Didier Brault , diagnosed electrosensitive since the arrival of a relay antenna near his farm, at Patrick Pilon , whose rabbit breeding was completely decimated, the fault according to him to a relay antenna; or in the Côtes d’Armor , at Stéphane Le Béchec and Patrick Le Néchet , two breeders disoriented by a multitude of electromagnetic nuisances.

Because the union is strength, some farmers gathered under the banner of the association Live Animals , an association created in the 90s and relaunched in April 2019. It now has about thirty members.

What is the impact on human health?

Sometimes animals, which can not be accused of inventing diseases, can be whistleblowers . What about the impact of electromagnetic radiation on human health ?

Joint pain, sleep disorders, tinnitus … some farmers complain of very disabling ailments. But they are not the only ones: in France, the number of people declaring themselves electrohypersensitive is constantly increasing .

Faced with these emerging environmental problems, which could also be the cause of childhood leukemia or even brain tumors according to ANSES, research is progressing . But a great deal of uncertainty still surrounds the health effects of electromagnetic fields and waves.

Uncertainty that feeds the concerns and questions of those who claim to be victims but also more generally a growing part of the population. All are now waiting for answers, as summarized by Serge Provost:

“We are not against progress but it must not be at the expense of living!”

-Waves and electromagnetic fields: breeders seize justice after the death of their animals

François Lafforgue, lawyer of the association Live Animals, will defend a dozen farmers against electricity carriers and telephone operators.

These breeders of dairy cows, beef, pigs and poultry, settled in the west of France, but also in the Aveyron, in the North or in the Center, have observed important mortalities and behaviors. abnormal in their herd after the installation of a relay antenna , a power line , wind turbines or after the start of a milking robot.

-Cows: a big model for EMF research, somewhere between Vet-Journals and “Nature” 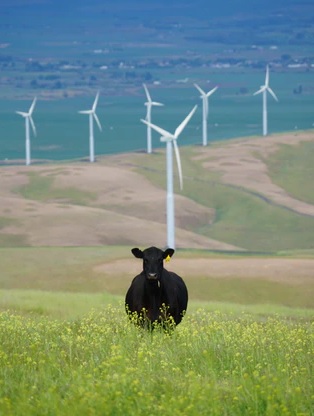 Avoidance of different durations, colours and intensities of artificial light by adult seabirds