Lawyer Billy Gundelfinger is accustomed to ugliness in the courtroom, but not jutting into his sea view.

The acclaimed attorney, who has represented the likes of Cyril Ramaphosa and Mandla Mandela, is now taking aim at the City of Cape Town and a cellphone mast on top of the scout hall in Clifton.

Gundelfinger and fellow members of the Clifton Bungalow Owners Association (BOA) claim they have been duped by the council over a cellphone tower lease with MTN.

Three years ago, the residents rejected a city proposal to renew MTN’s 10-year lease on the tower, above 4th Beach.

The tower, long considered an eyesore, was duly earmarked for decommissioning and removal, according to documents in possession of the Sunday Times. But rather than remove the mast, and unbeknown to the objectors, the city renewed the lease on condition MTN find another site.

The residents’ association is now threatening legal action amid growing concern about a proliferation of masts across Cape Town, many of them in dispute.

Gundelfinger, on behalf of the BOA, said the city had failed to comply with two written undertakings to remove the mast and infrastructure. “They [the city] thereafter unlawfully entered into a 10-year lease with MTN, which lease had a six-month-notice escape clause,” he said.

Gundelfinger recently led a successful challenge against a R1.5bn development plan for nearby Maiden’s Cove.

Correspondence in 2016 between the BOA and telecommunication infrastructure official Gary Dammert confirms the city undertook to remove the tower. Two years later, the association accused the city of delaying tactics. They dismissed as “highly suspicious” an excuse that they “didn’t want users of the network to lose coverage” over the December holiday.

Council spokesperson Luthando Tyhalibongo said MTN had now identified an alternative site for the tower, and the land-use application for the site will go before the municipal planning tribunal on August 6.

MTN spokesperson Jacqui O’Sullivan said the city had granted the company permission to remain on the Clifton site until finalisation of a precinct redevelopment plan.

“There have been ongoing negotiations to find an alternate site for the mast,” O’Sullivan said.

“MTN has an obligation to provide services to our customers and the broader community, and the unilateral removal of the site would have created a coverage and quality gap that will have frustrated customers and businesses in the area. The city granted MTN permission to remain on the site until its redevelopment/demolition plans are concluded.”  https://www.pressreader.com/

A High Court date has been set  for the the 23 rd of September for the following case, see details in our post “Illusion of Inclusion” below:

“Illusion of Inclusion” – The Farce of Public Participation

A cell tower is planned for the Dutch Reformed Church in Makhanda which falls within the city’s Conservation Area. This is the historical centre of Grahamstown as defined by Makana’s Local Economic Directorate and developments in this area are also subject to approval by the Eastern Cape Provincial Heritage Resources Agency (ECPHRA). Sunnyside resident Roddy Fox has since done research that shows around a third of Makhanda’s declared heritage sites are situated within a 250-metre radius of the planned cellphone tower.

In Redelinghuys a decades old church building was destroyed in a fire: 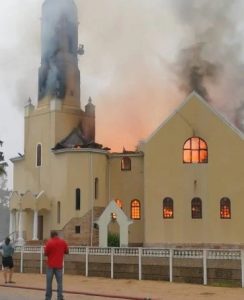 The church was built in 1918. The church housed cellular antennas, base stations and other telecoms equipment belonging to Vodacom, MTN and Openserve. West Coast district’s chief fire officer Bertus Senekal said the fire, which completely destroyed the church, could have been started by short-circuit in the tower. https://citizen.co.za/news/south-africa/local-news/2114548/fire-razes-100-year-old-dutch-reformed-church-near-cape-town/

CapeNature officials, who are responsible for the Matroosberg peak, said they do not know who commissioned the tower – and said the party did not seek permission.