WASHINGTON (BUSINESS WIRE)  A public policy report on the Internet and the future of landlines and wireless networks,  “Re-Inventing Wires: The Future of Landlines and Networks,”  was published online today by the National Institute for Science, Law & Public Policy (NISLAPP) in Washington, D.C.

January 26, 2018: New report evaluates significant risks of planned ‘antenna densification’ in the U.S. and calls for investment in high-speed fiber-based Internet access to every household and workplace.

The U.S. Should Instead Invest in Hard-Wired Telecommunications Infrastructure to Support Economic Growth, Bridge the Digital Divide and Diminish Risks to Security, Privacy, Public Health and the Environment.

Because broadband networks and the Internet have become vital components of our nation’s physical, cultural and social structure, the future of these networks, the report says, must be steered towards the fastest, most reliable and future-proof, and secure infrastructure available. Such infrastructure would be wired, not wireless.

Dr. Timothy Schoechle, author of the report and Senior Research Fellow at NISLAPP, says, “We are seeing the present national emphasis on wireless technologies because the ‘triopoly’ of Verizon, AT&T, and Comcast that dominates our access to the Internet imposes artificial scarcity, planned obsolescence, and high prices to maintain their immense profits. It is in their interest to obscure the fact that advanced copper and optical fiber are far superior to wireless in both cost and performance.”

From a broad analysis of available data, “Re-Inventing Wires: The Future of Landlines and Networks” demonstrates wireless systems cannot provide long-term solutions for universal, reliable and affordable Internet accessibility, nor support the ever-increasing data rates that will be needed in the near future for each American home and business. Investment in wired, not wireless, information infrastructure is needed across the U.S. right now.

Schoechle says, “Government officials have been misled about the adequacy of wireless communications. Legislators should stop enabling the wireless industry’s plans for massive new deployments of 4G LTE and soon 5G millimeter wave antennas throughout American neighborhoods, and instead commit to supporting reliable, energy-efficient and enduring hard-wired telecommunications infrastructure that meets the nation’s immediate and long-term needs.”

“Re-Inventing Wires: The Future of Landlines and Networks” explains why on technological, and other grounds, including the energy guzzling nature of wireless antennas and networks, an intensely wireless approach to communications, now being planned by the wireless industry, is the wrong direction, and very clearly not in the public’s best interest.

“Largely due to failures and consequences of the Telecommunications Act of 1996,” Schoechle says, “the Internet is not living up to its potential. It has been hijacked by the commercial motivations that have come to re-define and constrain the availability, quality, content, and media of high-speed access in the United States…. While other countries are investing to assure citizens’ access to a fast and reliable information highway, U.S. legislators appear asleep at the switch, captured by the wireless industry and its lobbyists.”

Importantly, “Reinventing Wires: The Future of Landlines and Networks” explains the renaissance that has occurred in wired technologies in recent years and how these advances offer tremendous potential for America’s sustainable connectivity of the future, one that is fast, equitable, safe, secure, and energy-efficient.

The paper, “Re-Inventing Wires: The Future of Landlines and Networks,” will be presented as part of a panel at The Commonwealth Club of California, Monday, February 5th at 5:30 p.m. in San Francisco, CA.

Link to the article https://www.businesswire.com/news/home/20180126005137/en/Wireless-Networks-Fast-Secure-Reliable-Energy-Efficient-Wired#.Wmt4B2TAMPw.twitter 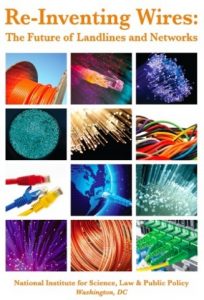 FROM INGENUITY TO THOMAS PESQUET: WHICH FREQUENCIES ARE USED FROM SPACE?