It is with sadness that we report the passing of Martin Blank at the age of 85. A former Columbia University Professor, Blank was a long-time EMF researcher, best known for his collaboration with Columbia University’s Reba Goodman and his 2014 book, “Overpowered.” He called himself an “unlikely activist” and urged people to practice precaution. (via Microwave News) 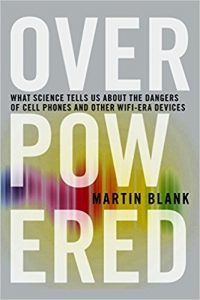 Martin Blank earned PhDs in physical chemistry (1957) from Columbia University and in colloid science (1960) from University of Cambridge. His research has been on membranes, transport processes, excitation, and on health effects of electromagnetic radiation (EMR).

He has published over 200 papers and reviews, as well as twelve edited books on electrical properties of biological systems, including the Proceedings of the First World Congress on “Electricity and Magnetism in Biology and Medicine”, “Electromagnetic Fields: Biological Interactions and Mechanisms”. He was one of the organizers of the online Bioinitiative Report, and edited the 2009 update in Pathophysiology. http://www.physiology.columbia.edu/MartinBlank.html

DNA is a fractal antenna in electromagnetic fields. https://www.ncbi.nlm.nih.gov/pubmed/21457072

He will be missed and we thank him for his contribution to EMF research. Our thoughts are with his loved ones.