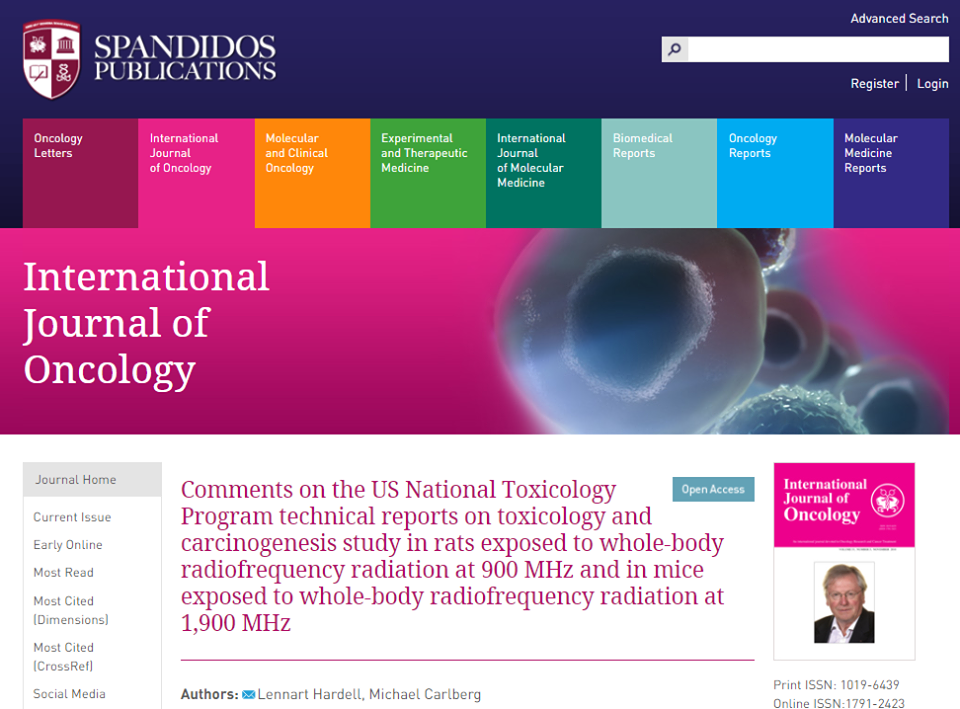 During the use of handheld mobile and cordless phones, the brain is the main target of radiofrequency (RF) radiation. An increased risk of developing glioma and acoustic neuroma has been found in human epidemiological studies. Primarily based on these findings, the International Agency for Research on Cancer (IARC) at the World Health Organization (WHO) classified in May, 2011 RF radiation at the frequency range of 30 kHz‑300 GHz as a ‘possible’ human carcinogen, Group 2B. A carcinogenic potential for RF radiation in animal studies was already published in 1982. This has been confirmed over the years, more recently in the Ramazzini Institute rat study. An increased incidence of glioma in the brain and malignant schwannoma in the heart was found in the US National Toxicology Program (NTP) study on rats and mice. The NTP final report is to be published; however, the extended reports are published on the internet for evaluation and are reviewed herein in more detail in relation to human epidemiological studies. Thus, the main aim of this study was to compare earlier human epidemiological studies with NTP findings, including a short review of animal studies. We conclude that there is clear evidence that RF radiation is a human carcinogen, causing glioma and vestibular schwannoma (acoustic neuroma). There is some evidence of an increased risk of developing thyroid cancer, and clear evidence that RF radiation is a multi‑site carcinogen. Based on the Preamble to the IARC Monographs, RF radiation should be classified as carcinogenic to humans, Group 1.

Notes by EMFSA: additional studies to consider regarding the carcinogenic classification of RFR as a Human Carcinogen.