Last January, a team led by Yawei Zhang of the Yale School of Public Health in New Haven published an epidemiological study on the possible link between thyroid cancer and cell phones. Though some “suggestive” associations were seen among long-term users, none was statistically significant. Still, the results “warrant further investigation,” they advised.

Zhang did follow up, and what she found could well change the way people think about cell phone cancer risks.

She discovered that some people have an innate susceptibility to thyroid cancer when exposed to cell phone radiation. These individuals have small variations in their DNA which affect the functioning of seven different genes.

These new findings will appear in the March 2020 issue of Environmental Research. A typescript copy is available now on the journal’s web site.

“The findings suggest that genetic susceptibilities play an important role in cell phone use and the risk of developing thyroid cancer,” Zhang said in a statement. They “could help to identify subgroups who are potentially at risk.” 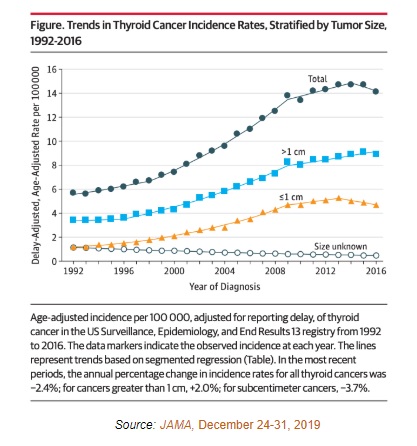 Microwave News reminds us that over a decade ago, researchers in Shanghai reported that children with variant SNPs in their DNA repair genes were more likely to develop leukemia if they lived close to power lines. (More here.)

The work was never followed up.

What has Light got to do with Breast Cancer?