Scientists have concluded their peer review of the draft reports of the $25 Million US government National Toxicology Program (NTP) study on cell phone radiation.
Recommendations by the expert panel:

The panel also recommended that the NTP upgrade the evidence for malignant glioma (brain tumors) in male rats exposed to GSM cell phone radiation from EQUIVOCAL to SOME EVIDENCE.

Near the close of the first day of the peer review meeting of the NTP RF animal study, Ron Melnick, who led the team that designed the study, said from the floor: “The purpose of the study was to challenge the null hypothesis that are no adverse health effects at minimal exposure intensities. The null hypothesis has been disproved.” The point is that you can argue about the nature and extent of the health risks, but not whether they exist.

Excellent advice from Dr. Adler: “we cannot wait lifetimes to determine that cellphones cause brain cancer. The FDA must carry out risk assessment now including both néoplastic & noneoplastic tissues.”

“It should most likely lead to a reduction in exposure limits,” said Ronald Melnick, the NTP scientist who designed the study before he retired nine years ago. 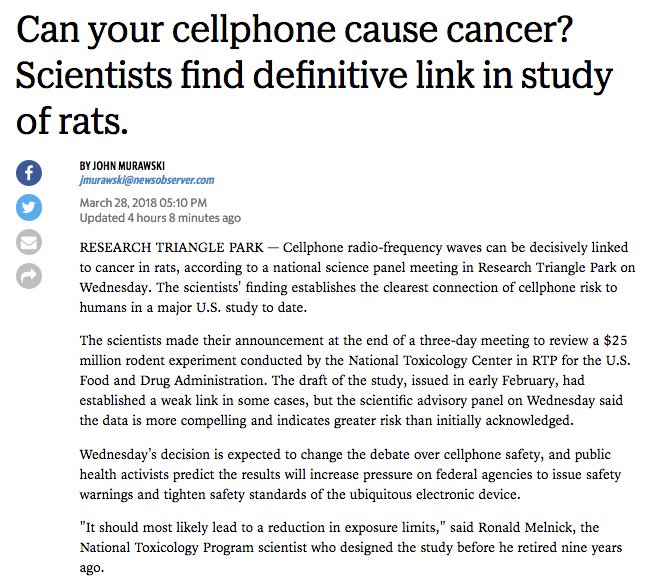 “Enough is enough, how many more deaths would be needed before serious action is taken? Over the past 15 years more and more data have been accumulating. Today the external peer reviewers of the National Toxicology Program voted to increase the level of evidence for the causal role of radiofrequency radiation for several tumors and other negative health effects. It’s time for action,” stated Dr. Annie Sasco MD, DrPH, former Chief of Research Unit of Epidemiology for Cancer Prevention at the International Agency for Research on Cancer of the World Health Organization and medical advisor to Environmental Health Trust (EHT).
Table of recommendations of the peer review panel:
Joel Moskowitz http://www.saferemr.com/2018/01/national-toxicology-program-peer-public.html  has compiled a table with all 20 recommendations of NTP’s peer review panel, side-by-side with those in NTP’s draft report. 180328_summary of NTP expert panel recommendations
The FDA responds:

The FDA’s director of the office of science and engineering, Edward Margerrison, attended the meeting and warned afterwards against forming rash conclusions based on Wednesday’s votes. “We’re taking a responsible approach,” he said. “We’re not gonna knee-jerk on anything.”

The FDA will translate the rodent findings to human health risks, and the Federal Communications Commission will decide whether the FDA conclusions are serious enough to warrant setting lower emissions standards for U.S. cellphones or taking other precautions.

EMFSA notes the following: upon the release of the NTP draft reports (even BEFORE the outcome of the peer review) the Director of FDA’s Center for Devices and Radiological Health, Jeffrey Shuren stated: “We believe the current safety limits for cell phones are acceptable for protecting the public health.”

Sources and additional  information relating to the NTP Study:
Can your cellphone cause cancer? Scientists find definitive link in study of rats. http://www.newsobserver.com/news/business/health-care/article207112454.html#storylink=cpy

How Big Wireless Made Us Think That Cell Phones Are Safe: A Special Investigation:

Training the Circadian Clock, Clocking the Drugs, and Drugging the Clock to Prevent, Manage, and Treat Chronic Diseases

FROM INGENUITY TO THOMAS PESQUET: WHICH FREQUENCIES ARE USED FROM SPACE?