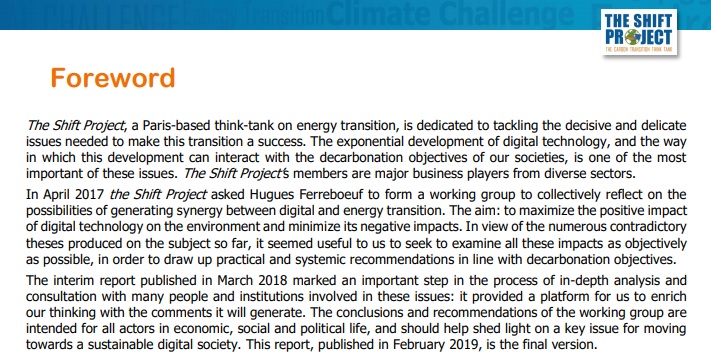 The interpretations, positions and recommendations contained in this report cannot be attributed to either the
members of the working group or the reviewers. The content of this report is the sole responsibility of The Shift
Project. Report: https://drive.google.com/file/d/1CFFQh0fmtOvGoIl1bw6URoW9rSLyZiB9/view

Our tech addiction is cooking the planet. The manufacture and use of smartphones, computers and TVs will produce 4 per cent of global greenhouse gas emissions by 2020 and 8 per cent by 2025.

That is the conclusion of a report on the sustainability of the digital technology sector put together by 12 experts for a Paris-based think tank called The Shift Project, which says that energy use in this sector is increasing by 9 per cent every year.

In theory, digital technology could replace other activities that produce even more emissions. For instance, people might be using video conferencing instead of flying to meetings. But this isn’t happening, says Maxime Efoui-Hess, one of the authors of the report.

“The ‘good effects’ of digital technologies, in terms of energy consumption and associated greenhouse gas emissions, are constantly neutralised at global scale by the fact that we use these technologies without thinking about the right way to do it,” he says.

The Shift Project wants companies and governments to adopt “digital sobriety” as a principle. That means buying less-powerful machines, replacing them less frequently and not using energy-intensive approaches where possible.

Although there is some evidence that consumers are replacing smartphones less often, the general trend is to do more with ever-more-powerful machines. Artificial intelligence in particular is extremely energy-intensive.

The report’s definition of digital technology includes the data centres that store and supply internet content, along with the equipment needed to access it, from phones to Wi-Fi routers. It doesn’t include digital equipment in cars and factories. As there are no official global measures of digital energy use, the team instead had to make estimates on the basis of available data, such as statistics on the sales of TVs and other hardware.

The report updates a 2015 study by Anders Andrae of Huawei Technologies. That study has been criticised for greatly overestimating the growth in energy consumption. The new work, however, suggests that digital energy use is growing much faster than previously predicted. “The report is sound,” says Andrae. “They have thought a lot about the problem at hand.”

Looking Earthward for inspiration to clean up space

Lithium-ion batteries need to be greener and more ethical

This website uses cookies to improve your experience while you navigate through the website. Out of these, the cookies that are categorized as necessary are stored on your browser as they are essential for the working of basic functionalities of the website. We also use third-party cookies that help us analyze and understand how you use this website. These cookies will be stored in your browser only with your consent. You also have the option to opt-out of these cookies. But opting out of some of these cookies may affect your browsing experience.
Necessary Always Enabled

Performance cookies are used to understand and analyze the key performance indexes of the website which helps in delivering a better user experience for the visitors.

Analytical cookies are used to understand how visitors interact with the website. These cookies help provide information on metrics the number of visitors, bounce rate, traffic source, etc.

Advertisement cookies are used to provide visitors with relevant ads and marketing campaigns. These cookies track visitors across websites and collect information to provide customized ads.

Other uncategorized cookies are those that are being analyzed and have not been classified into a category as yet.