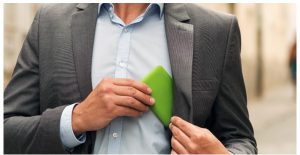 The control of exposure to waves emitted by mobile phones was modified in 2016 to take into account the evolution of models and uses. Since then, manufacturers are required to evaluate the exposure under realistic conditions of use, ie when the phone is placed very close to the body, at most 5 mm away. However, a large number of phones that comply with the previous regulations still used have high levels of exposure when placed close to the body. ANSES was asked to evaluate the possible health effects related to these exposure conditions. Following its expertise, ANSES recommends that measures be taken to ensure that users are no longer exposed to high levels when phones are worn close to the body.

A necessary adaptation of standards to the evolution of mobile phones

SAR, or Specific Absorption Rate, is the indicator used to evaluate the amount of energy absorbed by the body exposed to radiofrequency electromagnetic waves. The statutory limit value of the SAR in France is set at 2 W / kg, whether the phone is placed at the level of the head or the trunk.

Before being placed on the market, the compliance of telephones with this SAR limit value is verified by laboratory measurements. Until 2016, the regulations stipulated that, when this SAR  measurement is carried out, manufacturers can choose the distance between the device and the body, between 0 and 25 mm. The majority of phones on the market were compliant for use at a distance of 15 mm.

However, the evolution of technologies and the use of mobile phones, often worn very close to the trunk, such as in a jacket, has led the National Frequency Agency (ANFR) to carry out SAR measurements under conditions of more realistic use. Tests of nearly 300 phones placed near the trunk, in contact and at 5 mm distance, were carried out between 2012 and 2016. The results revealed that a large proportion of the phones tested had SAR values ​​higher than the value of 2 W / kg, some exceeding 7 W / kg on contact.

Since 2016, a new European directive, called “RED”, imposes to measure the SAR by positioning the mobile phone at 5 mm from the trunk at most, corresponding to “predictable” conditions of use. However, phones that comply with the previous regulations, but have high SAR values ​​when placed close to the body, are still on the market. In addition, many of these phones are still used.

Given the high values ​​of “trunk SAR” reported by the ANFR for a large number of telephones, ANSES was asked to identify any biological or health effects specifically related to exposures to SARs greater than 2 W / kg. For this purpose, ANSES reviewed recent studies on the potential effects of such levels of exposure. The publications analyzed in ANSES’s previous expert reports on radiofrequency risks were also taken into account.

The data available in the literature relate exclusively to experimental studies in animals or cell cultures. The methodology for assessing the level of evidence has therefore been adapted, in the absence of human studies. The results of the expert report demonstrate, with limited evidence, biological effects on brain activity related to exposures greater than 2 W / kg, but do not support a finding of existence or not of effects on other biological functions specifically associated with such trunk exposures.

The Agency also emphasizes that, in the context of the SAR measurements carried out for the ANFR, the electromagnetic radiation emissions of mobile telephones correspond to a “worst case” situation, for which the device transmits at maximum power during the entire test period, which happens a priori not in real conditions.

On the one hand, potentially high exposures when the phones are placed very close to the body, on the other hand, uncertainties that remain about the possible long-term health effects related to the waves emitted by the phones, therefore the ANSES recommends that measures be taken to ensure that users are no longer exposed to SARs greater than 2 W / kg (for example, through phone software updates, phone recall).

The Agency also recommends changing the normative provisions so that the verification of conformity of the “Trunk SAR ” of mobile phones is carried out in contact with the body.

In the meantime, the Agency invites users of these phones, when worn close to the body, to comply with the terms of use, including the distances of remoteness mentioned in the manuals of the phones.

For the original article in French please see: https://www.anses.fr/fr/content/expositions-aux-t%C3%A9l%C3%A9phones-mobiles-port%C3%A9s-pr%C3%A8s-du-corps

Oxidative Stress in Health and Disease