DDoS attacks have been around for 20 years, but the current tech environment is fuelling a renewed interest for them, with 5G set to play a fundamental role.

5G holds a lot of promise for improved communications but may well worsen the DDoS nightmare as it is unfortunately, a breeding ground for distributed denial of service (DDoS) attacks. As a refresher, DDoS attacks are a malicious method of disrupting a website/online service by overwhelming it with too much traffic.

If a website is rendered inoperable, the effects can be felt even years later. The impact can result in lost sales, wasted budgets, dissatisfied users (who may never return), and data theft. What’s more, DDoS attacks can be very damaging to a company’s reputation. Perhaps most frightening of all is that anyone can fall victim at anytime. Think financial institutions, healthcare, local governments – anyone. Thus, this style of attack is highly powerful and should not be underestimated. The biggest risk is that large-scale DDoS attacks take down financial institutions and critical infrastructure. Thus, DDoS mitigation that can cope with attacks in the range of terabits becomes a crucial necessity. 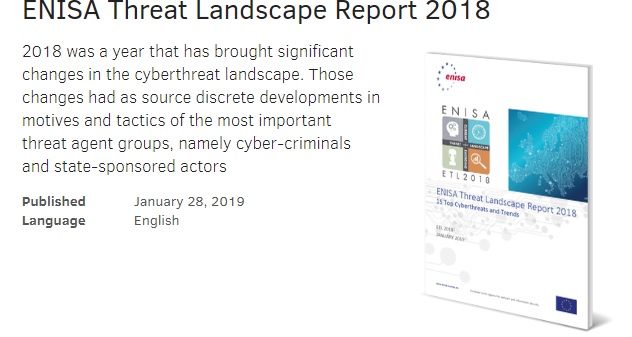 ENISA: The first malware targeting safety systems of critical infrastructure: during the reporting period, we have observed Triton which is the first malware that targets Safety Instrumented Systems (SIS)86,87,88 Safety instrumented systems are designed to shut down industrial processes when unsafe operating conditions are reached. Successful exploitation of such systems could lead to serious implications (see Stuxnet89 and Industroyer90). It is expected that the ICS/SCADA domain will be increasingly targeted by advanced threat actors having the capability and intent to execute such operations.

On the 1 st of October 2019 the FDA released a statement informing patients, health care professionals, IT staff in health care facilities and manufacturers of a set of cybersecurity vulnerabilities if exploited by a remote attacker—may introduce risks for medical devices and hospital networks. URGENT/11 affects several operating systems that may then impact certain medical devices connected to a communications network, such as wi-fi and public or home Internet, as well as other connected equipment such as routers, connected phones and other critical infrastructure equipment. These cybersecurity vulnerabilities may allow a remote user to take control of a medical device and change its function, cause denial of service, or cause information leaks or logical flaws, which may prevent a device from functioning properly or at all.

On the 9th of October 2019 the EU Member States published  a report on EU coordinated risk assessment of 5G networks security.

5G’s anticipated exponential spread of high-speed bandwidth and connected IoT means that in addition to widespread motivation, easily available attack tools, and proliferating IoT attack sources, dramatically bigger attacks will be possible because the “5G highway” will have many more lanes to enable vastly higher rates of traffic—both good and bad.

DDoS in a 5G environment

Unfortunately, cyber criminals can make big bucks through 5G vulnerabilities, and what’s worse is that they know it. 5G boasts hyperconnectivity, but this is most certainly going to create an influx of malicious traffic. As the number of connected devices and 5G deployments increase, so will the number of attacks. In particular, cyber criminals will take advantage of any poorly secured devices. However, it’s not just the amount of attacks that are a concern, but how quickly they can spread too.

There is an element of naïvety about business’s capabilities to combat 5G threats in the first place. CISOs (chief information security officers) already struggle to get resources to handle current threats while business leaders push for 5G adoption. Meanwhile, cybercriminals will take the opportunity to exploit higher capacity bandwidth that 5G provides to launch attacks on an unprecedented scale. Most CISOs don’t have the resources they need for pre-5G attacks anyway! Business leaders are ever so enthusiastic about getting on 5G, but CISO resources are so thin on the ground that it may not be enough.

Not only that, but with 5G, we’re delving into the unknown. It’s still a pioneering technology, so we are yet to uncover new vulnerabilities it’s sure to introduce.

WHY could 5G be Dangerous to Airplanes?!

5G’s Waveform Is a Battery Vampire