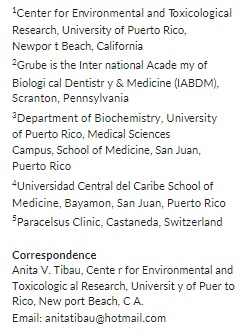 Historically, titanium (Ti) has maintained the reputation of being an inert and relatively biocompatible metal, suitable for use in both medical and dental prosthesis. There are many published articles supporting these views, but there is recent scientific evidence that Ti, or its corrosive by‐products, may cause harmful reactions in humans. It is important for all medical and dental professionals to understand the implications, complexities, and all potential pathways of exposure to this metal. These exposures are not only from the environment but also through various commonly used products in medicine that are often completely overlooked. These external (intermittent) and internal (constant) exposures have an impact on whole‐body health. This review examines possible harmful effects, risks, and often ignored potential complications of Ti exposure to human health.

Metallic devices are well known to strongly interact with EMF by diffraction or focusing thus, leading to a significant local enhancement of field intensity.22 With the use of electronic devices, such as cellphones or personal computers (PCs), becoming increasingly prevalent in recent years, many articles only emphasize the convenience of these electronic devices without addressing the potentially negative influences of the emitted electromagnetic waves on the body.23

Metals present within the body can act as an antenna to collect harmful radio waves, thus inducing many general and severe symptoms, such as headaches, fatigue, tinnitus, dizziness, memory loss, irregular heartbeats, and whole‐body skin symptoms, which are considered to be caused by electromagnetic hypersensitivity. In dentistry, Ti dental implants may be the material most commonly associated with antenna activity and may promote harmful effects of electromagnetic waves. Dental treatments should be performed in a manner that avoids the harmful influences of radio waves on patients.23 We believe this can be accomplished by using biocompatible nonmetal dental materials.

Metallic implants amplify high frequency (HF)‐EMF 100‐700 folds nearby and exceed the safety levels. If dental metals (crowns, fillings, bridges, Ti implants) are implanted in the upper jaw, HF‐EMF is enhanced in the cranial nerves and brain. The presence of dental metals may increase the risk for HF‐EMF‐induced brain cancers several fold and should be acknowledged as confounding variable in future studies, exploring brain cancer risk in dependence of HF‐EMF exposure.24

Yakymenko et al25 looked at 100 available peer‐reviewed studies dealing with low‐intensity RFR; 93 of these studies confirmed that RFR induces oxidative effects in biological systems. The oxidative efficiency of RFR can be mediated via changes in activities of key ROS. ROS and their involvement in cell signaling pathways explains a range of biological/health effects of low‐intensity RFR, which include both cancer and noncancer pathologies. In turn, a broad biological potential of ROS and other free radicals, including both their mutagenic effects and their signaling regulation, makes RFR a potentially hazardous factor for human health.

The modern data on the biological effects of low‐intensity RFR leads to a firm conclusion that this physical agent is a powerful oxidative stressor for living cells.25 The database used by Yakymenko25 was about 18 months old, when that paper was published. As of July 8, 2015, there had been 153 papers published on the oxidative stress effect of RFR, of which 90% (137 papers) showed effect vs 10% (16 papers) reporting no effect. Thus, there is overwhelming peer‐reviewed research confirming the potential harmful effect of radiofrequency radiation.26 Sometimes head and neck cancer patients treated with high‐energy X‐rays and gamma rays have Ti dental implants. Ti dental implants in the field of irradiation were capable of causing significant radiation scatter. Therapists involved in radiation planning should consider dental implants on the radiation beam as a presumed cause of osteoradionecrosis.27 The calculations showed that the presence of a dimension‐reduced implant results in remarkable differences in the dose distribution all around the implant.

Similar to standard implants, the risk for dose enhancement was notably important for the bone in direct contact with the implant.28 For the different radiation beams studied, the irradiation angle between scattering Ti dental implants and the central axis does not significantly affect the total dose that may lead to osteoradionecrosis of the mandible.29 Animal and human studies indicate that irradiated bone has a greater risk of implant failure than nonirradiated bone. This increase in risk may be up to 12 times greater.30 Implant therapy is no longer considered impossible for patients who have received radiation treatment for head and neck cancer. However, the risk of osteoradionecrosis and failed osseointegration are barriers to implant therapy for this population.31

There is a significant increase in the risk of implant failure in irradiated patients (risk ratio: 2.74; 95% confidence interval: 1.86, 4.05; P < 0.00001) and in maxillary sites (risk ratio: 5.96; 95% confidence interval: 2.71, 13.12; P < 0.00001). Conversely, hyperbaric oxygen (HBO) therapy did not reduce the risk of implant failure (risk ratio: 1.28; 95% confidence interval: 0.19, 8.82; P = 0.80). Radiotherapy was linked to higher implant failure in the maxilla, and HBO therapy did not improve implant survival.32 There is a risk of radio frequency (RF) heat generation within Ti. 3.0 T‐MRI scanners are becoming increasingly common. The specific absorption rate (SAR) of 3.0 T‐MRI is quadruple that of SAR compared with 1.5 T‐MRI, due to its being proportional to the square of the strength of a static magnetic field. The effect of heat generation on 3.0 T‐MRI can thus be greater than on 1.5 T‐MRI. The rise in temperature of Ti implants was measured to be a maximum of 0.4°C.33 The impact of magnetic force from an MRI on dental materials will attract iron‐containing (or ferromagnetic) objects and may cause them to move suddenly and with a great force like a “missile”. This can cause possible risks to patients or anyone in an objects “flight path”. It can pull any ferromagnetic object in the body too. Tissue injury can be caused due to heating the prosthesis. RF heating was confirmed to take place at both ends of the implants in spite of their different shapes. It is recommended to treat all material as MR unsafe, if the dentist is not sure about the type of prosthesis/appliance. It is advisable to remove the prosthesis/appliances prior to MRI.34